The human body is pretty amazing! Seemingly unconnected parts of us can signal when there’s a larger problem elsewhere in the body. Our eyes get a yellow color when our livers aren’t functioning properly. Is it any wonder that how our fingernails look can actually be a warning that there’s something wrong with our kidneys?

Most of us probably don’t give our fingernails (and toenails for that matter) a second thought outside of grooming. Our nails are composed of a hardened protein called keratin. FIngernails grow on average of 1 centimeter per 100 days. The determining factors in nail growth are age, sex and time of year. For example, fingernails tend to grow faster in younger men during the Summer.

When people have kidney disease, nitrogen waste products build up in our bodies. Your kidneys are not filtering those products out properly. This can lead to changes in the look and structure of both fingernails and toenails. It’s not the ONLY cause of change though. Malnutrition and taking some medications can also contribute. Stress, melanoma, arthritis and psoriasis also have specific signs that you can see in your nails. Some of them even cross over into symptoms of kidney disease. So, if you notice these on your nails, consult with a medical professional to find out if something more serious isn’t going on in your body.

What Do Your Nails Say About Kidney Disease?

There are three different types of nails to be on the lookout for when it specifically comes to chronic kidney disease.

The name comes from a French physician, Joseph Honore Simon Beau, who first described the condition in 1846. Beau’s lines are deep grooved lines that run horizontally from side to side on the finger or toenail. See the image below.

These can be signs of acute kidney disease that interferes with the growth of the nail. They can also be signs of diabetes and vascular disease. Image from: https://www.news-medical.net

The official name for this is koilonychia. These are rough looking nails with ridges that are frequently spoon-shaped and concave. In the early stages of this condition, the nails may be brittle, chipping easily. Ridged nails happen when you have iron-deficiency anemia. There’s no way to miss when your nails look like they do below.

These type of nails can also be a sign of heart disease or hypothyroidism.  Image Source: https://www.healthline.com

The medical name for this type of nail is leukonychia, which comes from the Greek words that mean “white nails.” This is when white lines or dots appear on your finger or toenails. They can be many dots on one nail or it might be one larger spot that stretches across the nail. You can see an example below. 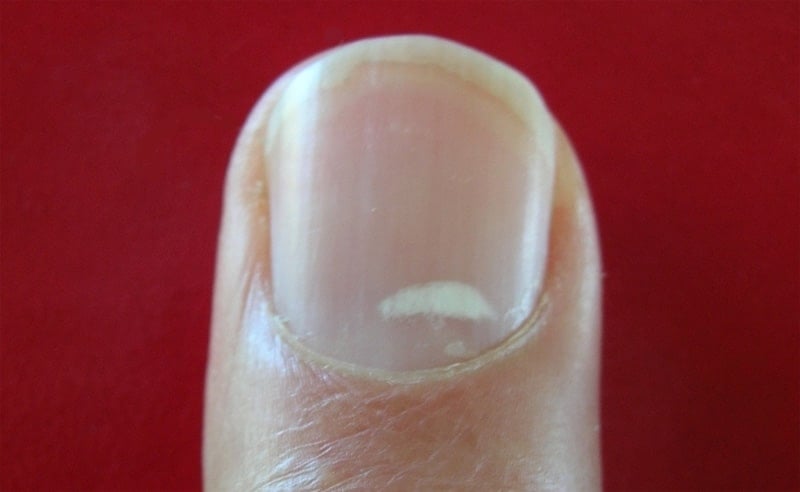 Injury is the largest cause of white spots, but they can also be indicative of heart disease, psoriasis and arsenic poisoning, as well as kidney disease.  Image Source: https://yourfingernails.wordpress.com

Other things to look for in nails are loosening nails, black lines, redness around the nail bed, half-and-half nails (also known as Lindsay’s nails) as they can indicate other diseases besides kidney disease.
If you look down at your nails and see any of these patterns, check with your local healthcare provider. They may want to run tests on you to see if it’s something minor or the start of something serious.